How are the emerging micromobility market and light-duty and heavy-duty sectors tracking towards electrification? We grade their progress here. 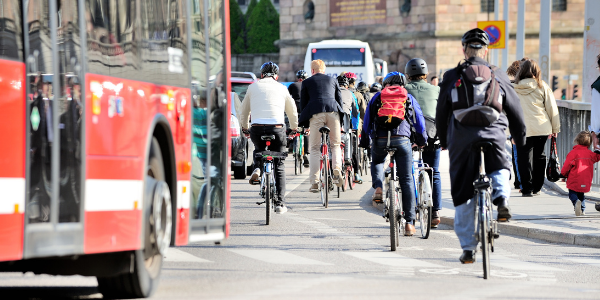 According to The International Council On Clean Transportation, on-road vehicles account for over 75% of global transportation emissions, with light-duty vehicles contributing to 43% of these emissions and heavy-duty representing 34%.

With good reason, electrification adoption is on the rise. Planes, trains, and automobiles — and bikes, boats, buses, and more — are all trading fossil fuels for batteries as they forge the way towards net-zero emissions. For some transport modes, electrification has been a seamless conversion and adoption journey. For others, obstacles pepper the path.

In this post, we’re taking a look at the emerging micromobility market and light-duty and heavy-duty sectors and evaluating their global electrification traction, incentives or barriers to adoption, and the sector’s overall impact on emissions. From there, we’re giving each sector an electrification grade (A-F) and sharing how we might expect each sector to evolve as electrification continues to trend.

The micromobility market represents the lightest weight of transportation. When you hear micromobility, think:

Generally designed for individual use, these electric vehicles are a cost-effective and environmentally friendly alternative for urban and suburban travelers on short journeys. In China, Europe, and the United States, nearly 60% of passenger trips are less than 8 kilometres. Sub-in a micromobility form of transportation for even half of these trips and the result is significant emissions reduction. A recent study showed that in a gasoline-powered car, a one-kilowatt hour of energy equates to 0.8 traveled miles, whereas an electric scooter could travel 82.8 miles using the same amount of energy.

Right now, over 50% of the world’s population lives in major cities, a figure that is expected to reach closer to two-thirds by 2050, according to Deloitte. As condensed urban populations increase, so does the demand and pressure on the public transportation system and city infrastructure for commuter options. Micromobility offers a cost-efficient transportation option that benefits the environment, cities, and commuters alike.

Despite barriers the sector faces, micromobility adoption has been booming. In the US alone, electric bike purchases were up 85% between 2019 and 2020, with adult leisure bike sales tripling. McKinsey expects that the micromobility market in China, Europe, and the United States could reach $500 billion over the next decade.

Micromobility transportation is the most cost-efficient mode of electric transportation, with significant impacts on emission reductions and the lowest environmental impacts. Its booming trends make this mode of transportation accessible and affordable. That said, certain conditions, driver mobility, and infrastructure requirements pose barriers to mass adoption that, in some cases, cannot be overcome and mark the need for other electric means of transportation.

Light-dutyelectric vehicles are probably the most popular types of electrictransportation from a consumer standpoint. Light-duty referring to:

Currently, there are an estimated 1.4 billion vehicles currently traveling roads across the globe. So it’s no surprise that in order to tackle climate change and air quality issues that the push for light-duty electric vehicle adoption has gained momentum. Global EV sales have seen large growth — 43% over the past year with 3.24 million vehicles sold — and it’s expected that 26 million EVs will be sold by 2030. However despite exponential year-over-year growth, EVs still only have 2-3% of the annual new-vehicle market share.

The EV adoption equation looks something like this: (Solid EV product performance)+ (ICE price parity) + (ideal total cost of ownership, including residual values) + (reasonable charging infrastructure) = adoption acceleration.  Within this equation, each component has obstacles to be overcome, which all relate to scale.

The only vehicles that have been mass-produced to date are city hatchbacks, sedans, and crossover SUVs. While there are trucks and larger SUVs expected to be released in the coming years, at this moment, many parties who value the utility of a pickup truck or large SUV are left without options when it comes to light-duty electric vehicles. Government subsidies are needed to incentivize adoption, but the best cit and federal incentives roll back after about 5% EV share of new sales. And, while modern countries’ electricity from the grid is the most widely available source of energy to people — and in theory, any EV could be plugged into the same plug as a standard appliance — there is still charging hesitation and range anxiety among buyers, particularly those who rely on street parking or communal garage parkades.

Despite barriers to adoption, light-duty electric vehicles have proven to have a strong impact on global emissions. According to recent studies in the United States that looked at where EVs had been sold versus global warming pollution, it showed that gasoline vehicles produced 4-7 times the emissions of a light-duty EV.  ‍

The light-duty electric vehicle sector gets a passing grade, but there is much room for improvement. There are standard bearers who are now near or above 50% of electric share for new vehicles across Scandinavia, Netherlands, and the United Kingdom. Even the state of California has made significant light-duty electrification strides. Acceleration go forward should be quite significant, but we need to see electrification adoption across other geographies that largely contribute to emissions such as the rest of the United States, China, India, and other European countries.

When we say heavy-duty vehicles, we’re speaking to commercial vehicles like:

This sector is perhaps in the direst need of mass electric adoption and essential to climate change action. Transporting people or goods with heavy duty vehicles accounts for 27% of US greenhouse gas emissions and about 70% of all US oil use. And, while diesel-powered heavy-duty vehicles only account for 5% of vehicles on the road, these trucks are traveling great distances and therefore contribute more than 20% of transportation emissions. In Canada, there are an estimated 1 million commercial vehicles on the road, each consuming 30 times more fuel than a light-duty vehicle.

Heavy-duty has made small steps towards electrification — IKEA delivery trucks manufactured by Lions and Amazon delivery trucks manufactured by Rivian are a few examples — but this sector has a long way to go. Heavy-duty electrification will face similar obstacles as those in light-duty electric vehicles when it comes to battery cost and charging solutions.

Where they will face different challenges is in energy demands, which are exponentially higher than light-duty. The energy density of a battery is much less than a similar size tank of diesel fuel, which is problematic. Heavy-duty will have to find every bit of efficiency in batteries and powertrains and find creative charging solutions in order to maintain operations and stay competitive.

The heavy-duty electric vehicle sector has recognized that they have a significant impact on global emissions, but there is much work to be done to close the gap. The sector needs regulation and mandates at the government level when it comes to electrification. Plus, manufacturing processes and equipment need to be improved to enhance power density in heavy-duty electric vehicles, driving efficiencies to keep heavy-duty vehicles going longer with increased performance.

Increase the performance in your electric fleet. Talk to Exro about how its Coil Driver™ can drive any AC motor with increased performance in a wide range of applications.