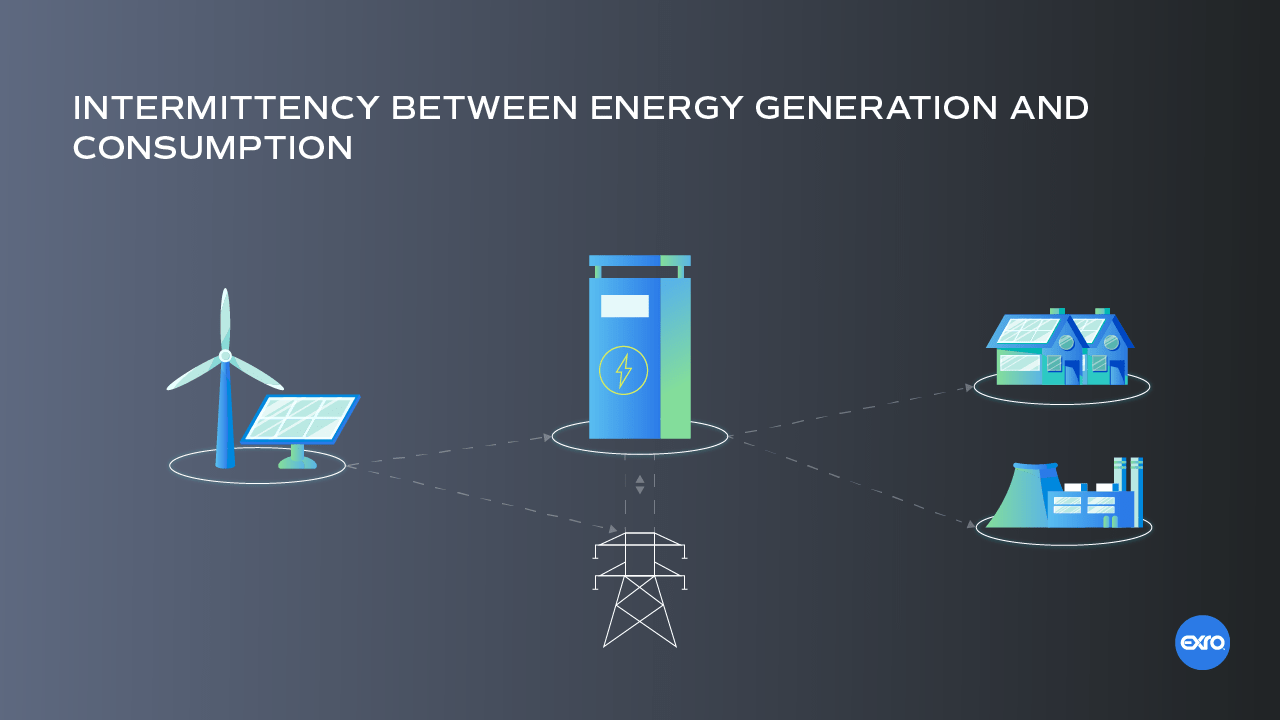 Electricity is essential to modern life. It is not just a luxury we use to run our gadgets and enjoy our leisure time; rather, it is a vital resource we rely on to carry out our daily tasks, generate revenues for our businesses, and provide public security, safety, and health.

Flexibility and resilience in power distribution is becoming increasingly important to deal with the rising share of variable renewables brought on by decarbonization of the energy system, as well as the rising simultaneous load from power electronics, manufacturing facilities, heat pumps, and the charging of electric vehicles.

Battery Energy Storage Systems (BESS) are the primary candidate for dealing with electrical grid flexibility and resilience through applications such as peak shaving. Batteries are of particular interest at small and medium scales due to their relatively high energy density, lack of geographic restrictions, minimal noise, and low maintenance requirements.

Battery Energy Storage Systems play a pivotal role between renewable energy supplies and responding to electricity demand. Energy supplied from renewable sources, or the electrical grid, is available for instant consumption and many factors such as variance in solar arrays or electricity market demand significantly impact the cost of electricity.

Co-locating energy storage with demand, such as by placing it in factories and medical facilities, has several important advantages. These advantages include peak shaving of both import from the grid and export from embedded renewables. Battery Energy Storage Systems provide backup power, delay infrastructure reinforcements, improve power quality, and increase self-consumption of embedded renewables.

What Is Peak Shaving?

Also referred to as load shedding, peak shaving is a strategy for avoiding peak demand charges on the electrical grid by quickly reducing power consumption during intervals of high demand. Peak shaving can be accomplished by either switching off equipment or by utilizing energy storage such as on-site battery storage systems. The objective of peak shaving is to eliminate short-term spikes in demand and reduce overall cost associated with usage of electricity.

Why Is Peak Shaving Important?

To understand the importance of peak shaving, it is necessary to examine how peak demand affects electricity prices. There are typically two components to an electric utility bill. Customers pay for electricity based on consumption, measured in kilowatt-hours (kWh) and demand, measured in kilowatts (kW). Demand charges usually apply to commercial and industrial customers, who tend to have higher peak loads than residential customers.

However, it should be noted that with the transition to electric mobility, the surge in the number of electric vehicles, and with the addition of residential fast charging infrastructures, demand charges could have a significant impact on residential electrical utility bills.

The contribution of demand charges varies geographically, but typically ranges from 30% to 70% of the customer’s electric utility bill. Thus, it is important to understand how demand charges work and how peak shaving through battery energy storage systems can minimize electricity charges without compromising the operation of any given application.

What Are Demand Charges?

Demand charges likely make up a sizable amount of your electricity bill if you are a major business or an industrial utility user. The demand charge is a monthly fee that you must pay to cover the expense of maintaining the infrastructure needed by the electric company to supply energy to your building.

Demand charges are determined by peak power usage rather than total energy consumption and are intended to assist electric utilities in covering the cost of delivering electricity when utility clients, such as factories, employ an energy load above a specific threshold. The demand charge is calculated based on usage during a 15-minute peak interval throughout the billing cycle, multiplied by the demand fee. So, the higher the peak usage in kW, the higher the demand charge is going to be.

What Are Consumption Charges?

Consumption charges are a measurement of the amount of energy used in kilowatt-hours during a billing period. Utility companies charge consumption based on three different billing structures.

With a flat billing structure, the user pays for electricity usage based on a constant rate for all consumption, regardless of time of the day or total amount of usage.

With a tiered billing structure, the user pays for electricity based on two or more rates for different usage amounts. When the user’s consumption passes a certain threshold, the rate at which they pay for electricity usage increases. The number of tiers and the thresholds for each tier differ based on geographical locations and utility companies.

With a time-of-use billing structure, the user pays for electricity based on two or more rates for different times of the day or days of the week. The utility will define intervals of on-peak and off-peak based on typical demand during that period. Utility companies can also utilize a combination of billing structures and incorporate seasonal rates as well.

How Does Peak Shaving Work?

The two charges that can significantly affect the rate at which industrial and commercial users pay for electricity include demand charges and consumption charges during on-peak intervals. As mentioned above, peak shaving is a strategy for mitigating demand charges and usage during peak times, thus it requires altering the operation of an application or implementing storage capabilities to store energy for later use.

Since shutting down or slowing productivity contradicts business goals and objectives, often businesses bare the cost of demand charges and on-peak charges, perhaps in part due to lack of knowledge about energy storage technologies.

A battery energy storage system is a method for storing electric charge using electrochemical storage units so that it can be utilized at a later time with the help of intelligent software that balance electricity supply and demand.

In times of peak the stored energy in an ESS is used. Battery Energy Storage Systems are especially effective because of the quick response time that they offer. With the help of intelligent control software, the battery discharges when grid prices rise or when local demand spikes.

Peak shaving is the most effective way to manage utility costs for customers with demand charges, but it can also mitigate consumption charges, and offer benefits to other stakeholders, as well. For example, self-consumption of embedded renewables can significantly reduce electricity bills. According to a research study by the Journal of Energy Storage, it is possible, though not guaranteed, that this operation may consequently reduce peak flows on the local distribution network, thus benefitting the distribution network operator (DNO) and subsequently other electricity consumers in the distribution area by lowering future distribution charges.

Implementing on-site storage in addition to solar photovoltaic capacity means that you get the biggest power bill reductions possible. You can use solar power from your panels during the day to charge your on-site batteries. The stored power bares minimal cost, and any extra charging can, if necessary, take place during off-peak intervals using the grid. When power is needed, users have the flexibility to choose electricity source based on the most affordable source at the time, whether that is solar power directly from the panel during the day, stored solar energy, or stored grid energy during off-peak intervals.

It is worth noting that a solar system is not required to take advantage of the benefits of energy storage systems. Peak shaving and emergency backup are examples of application that work without solar arrays, and customers can still benefit from the cost savings, stability, and resilience that energy storage units provide.

Perhaps the most important consideration when looking at Battery Energy Storage Systems is the intelligent software that controls and optimizes the operation of the system. The unit’s power capacity and density are critical, but without intelligent control software, the unit will be unable to respond quickly to changes in demand and thus unable to effectively mitigate costs through applications such as peak shaving.

There are two important types of software at play when looking at Battery Energy Storage Systems. The energy management system is responsible for intermittency between the grid, renewable energy sources, and the battery to ensure that the battery charges and discharges at the appropriate times and effectively responds to changes in demand. The battery control system is responsible for ensuring power quality, frequency regulation, and safe operation of the battery throughout its charging and discharging cycles.

At Exro, we are pioneering intelligent control solutions that expand the capabilities of batteries within energy storage systems with our patented Battery Control System™. The Exro Battery Control System™ offers unique advantages by managing the charging and discharging based on state-of-charge and state-of-health of the battery. The solution is optimized for maximum cell lifetime while enabling micro-protection mechanisms for enhanced safety and uninterrupted operation.

The enhanced control through Exro’s Battery Control System™ is a major technological advancement in the industry. The micromanagement mechanism enables Exro’s Energy Storage System to maintain operation if certain cells encounter faults that prohibit them from contributing to the system’s output. These faults could result in temporary system shutdowns, reduce system safety, and increase costs associated with maintenance. However, with Exro’s advanced control software, the depth of control is increased, enabling continuous operation and ensuring system operations beyond what is currently available in the market.

Exro is focused on offering an intelligent system that ensures power quality, safety, and continuous operation, but it also offers a modular design that can be easily adopted to any application size ranging from residential, to industrial, commercial, and utility. With Exro, energy storage operators have the peace of mind that the system will optimize power storage and consumption with our innovative Battery Control System™. Energy storage operators can also benefit from cost savings associated with reviving and repurposing second-life electric vehicle batteries to offer the safest and most cost-efficient technology.

The battery cells in an electric vehicle reach end of life within 8-12 years, depending on battery conditions. These batteries can be optimized and repurposed into a second life with Exro's Energy Storage System (ESS) through our innovative and emission-free process. This is not only safe and cost- effective, but also provides a solution to the challenge posed by the influx of end-of-life electric vehicle batteries.