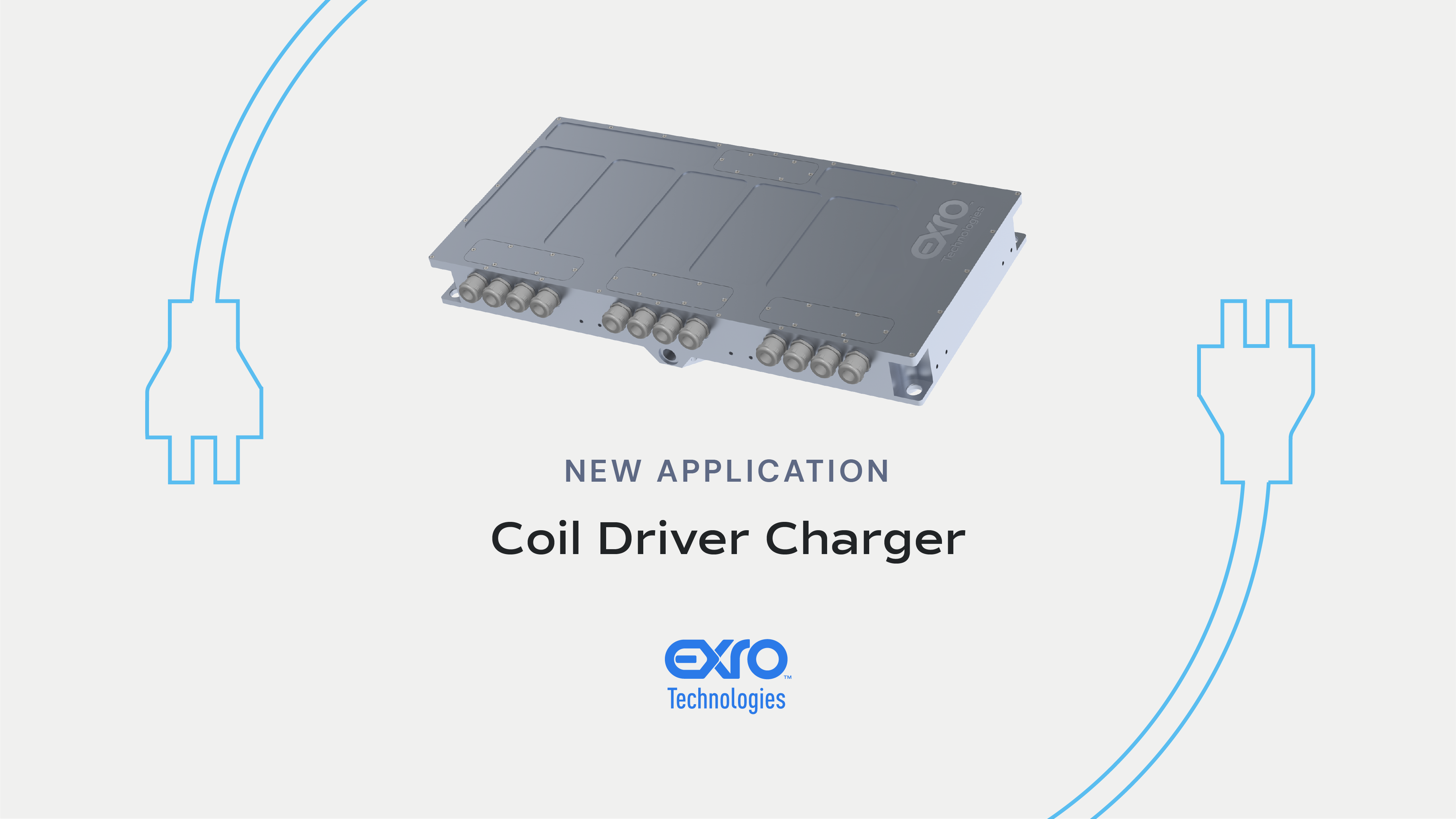 Calgary, Alberta (July 15,2021) – Exro Technologies Inc. (TSX:EXRO, OTCQB: EXROF) (the “Company” or “Exro”), a leading clean technology company with a new class of power electronics for electric motors and batteries, announced today a new application for its patented Coil Driverᵀᴹ technology that has the potential to dramatically reduce the cost and complexity associated with deploying electric vehicle (“EV”) infrastructure at scale.

The Coil Driverᵀᴹ technology can be used to deliver Level 1 to Level 4 charging capabilities, and provide electricity back to the grid, with significantly less power electronics. This includes charging capabilities from renewable energy sources like solar and wind power. The Company filed a new family of patents that covers this additional functionality for the Coil Driverᵀᴹ, further strengthening its cost positioning and demonstrating its continued commitment to driving bold innovative solutions in EV power electronics. The recent patent filing raises Exro’s combined held and submitted patent portfolio to 36 and comes on the heels of Exro’s graduation to the Toronto Stock Exchange.

Currently, EVs require three different types of power electronics components to power the vehicles in motion and charge the batteries from the grid or renewable energy sources: a motor drive, on-board charger and external DC fast charger. Exro engineers found that the Coil Driverᵀᴹ technology has the ability to replace all three components, significantly reducing the cost and complexity of deploying EVs and the charging infrastructure at scale.

“Unlocking the ability for the Coil Driverᵀᴹ to simplify and streamline fast charger deployments for charge point operators and automakers has the potential to be a game changer,” said Exro CEO Sue Ozdemir. “We hope that this will provide a path to standardization and enable EV charging infrastructure to scale at the pace needed to reach EV goals. This is a great example of how Exro continues to innovate and find new integrated solutions for our core technologies as the EV market continues to evolve.“

Initial findings show that the minimal addition of voltage sensors to the existing Coil Driverᵀᴹ enables this charging infrastructure use case. Next, the Exro team will continue development to validate whether the Coil Driverᵀᴹ can be a grid connected energy storage solution and provide electricity back when needed for resiliency and vehicle-to-grid (V2G) applications. If successful, this will increase grid flexibility and enable commercial and heavy-duty EV fleets to seamlessly serve as mobile energy storage systems that could be tapped for back-up power.

“Originally with the Coil Driverᵀᴹ, the goal was to develop the perfect electric powertrain. With recent concerns around the realities of scaling fast charging infrastructure and sustainable energy use, we have continued research and development activities that further enhance and build on the Coil Driverᵀᴹ capabilities to solve issues beyond just the vehicle,” said Exro Chief Engineer Eric Hustedt. “Initial findings show that it works, and we’re excited to proceed to the next phase. With Coil Driverᵀᴹ, Exro has the potential to make powering and charging EVs simple and cost-effective.”

Exro’s advanced motor control technology, the Coil Driverᵀᴹ, expands the capabilities of electric powertrains by enabling intelligent optimization for efficient energy consumption. Exro is working with many partners from all over the world to bring their technology to the electric mobility industries and beyond.

Visit us on social media @exrotech.

Some of the risks which could affect future results and could cause results to differ materially from those expressed in the forward-looking information and statements contained herein include the risk factors set out in Exro’s annual information form and also include, but not limited to:

This information is qualified in its entirety by cautionary statements and risk factor disclosure contained in filings made by the Company with the Canadian securities regulators, including the Company’s annual information form for the financial year ended December 31, 2020, and financial statements and related MD&A for the financial year ended December 31, 2020, filed with the securities regulatory authorities in certain provinces of Canada and available at www.sedar.com. Should one or more of these risks or uncertainties materialize, or should assumptions underlying the forward-looking information prove incorrect, actual results may vary materially from those described herein as intended, planned, anticipated, believed, estimated or expected. Although the Company has attempted to identify important risks, uncertainties and factors which could cause actual results to differ materially, there may be others that cause results not to be as anticipated, estimated or intended. The Company does not intend, and does not assume any obligation, to update this forward-looking information except as otherwise required by applicable law.

Neither the Toronto Stock Exchange nor the Investment Industry Regulatory Organization of Canada accepts responsibility for the adequacy or accuracy of this press release.